Mix together cake mix, jello, and flour. Add oil and water. Then add eggs one at a time. Add strawberries, mixing well. Bake at 350 degrees for 30-35 minutes for a sheet cake and 25 minute for layers. Cool before icing. For the frosting melt margarine and add sugar and strawberries. Mix until very smooth. Allow icing to cool before using. Store cake in refrigerator after icing. (Notes: Freezes well. If icing is not thick enough add more powdered sugar.)

In a large mixing bowl combine dry pudding mix, sour cream, milk and orange peel. Mix on low speed, scraping the bowl often, until thick. Fold in whipping cream. In a 3 quart serving bowl, layer half of the cake pieces, half of the strawberries, and half of the pudding mixture. Repeat the layers. Cover and refrigerate for at least 2 hours. Note: It is not necessary to whip the cream before folding it into the pudding mixture. Makes 10-12 servings. 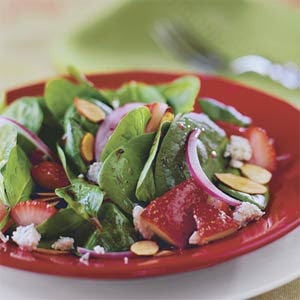 For dressing, mix 1 portion of vinaigrette dressing to 1 portion of poppy seed dressing. Example; one cup to one cup. For salad, prepare salad ingredients, except nuts. Toss dressing with salad. Sprinkle with nuts. Makes 8 servings. Other brands of salad dressing are fine.